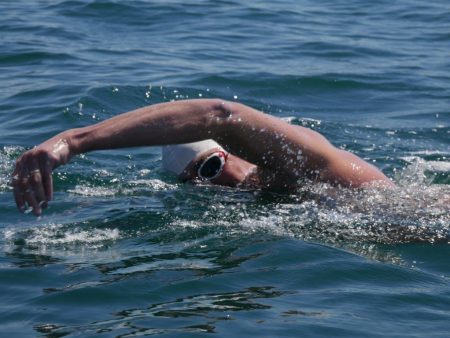 Dickinson Gleeson partner Craig Swart has completed a gruelling solo swim in aid of charity from St Catherine’s in Jersey to Carteret in Normandy, a distance of around 19 miles. Craig undertook the swim racing two long-time sea-swimming companions Simon “Haircut” O’Donoghue and Toni Buchholz, the three arriving in France 8 hours and 8 – 42 minutes after they set off.  The swimmers battled strong tides as they made their crossing and negotiated their way past Les Écréhous, a large reef of rocks, mid-way in their journey. The swim was in aid of the Grace Crocker Family Support Foundation, a charity that supports families from Jersey who need to spend time on mainland UK whilst their children receive medical treatment in hospital. So far they have raised an outstanding £3,000.

The three brand themselves as “The Three Amigos” and in 2015 successfully completed a solo charity swim around Jersey together, a total distance of 48 miles.  Dickinson Gleeson is again sponsoring the Jersey Round Island Challenge, where competitors either swim, canoe/kayak, row, stand-up-paddleboard or run around Jersey. The event will take place on Saturday 12 August and it too is in aid of the Grace Crocker charity. Last year 150 people took part in the inaugural challenge, including Craig Swart who swam as a member of a relay team.

Craig Swart said “It has been on my bucket list to swim from Jersey to France. After 8 hours in the water and with strong tides taking us north we started to flag a bit. But we persevered and I was delighted that all three of us reached our goal fairly close together. It also felt good to have helped the Grace Crocker charity. We could not have done it without our support teams, Paul James boat pilot and Bianca Kempster observer for Haircut; Ralph Buchholz pilot and Jenny Fitzgerald observer for Toni; Nick Dotter pilot, my son Cameron as 2nd and cameraman and Alice Harvey as observer for me; and backing and help from the Jersey Long Distance Swimming Club; and I would like to thank everyone who sponsored us.”

James Dickinson, Dickinson Gleeson’s Senior Partner, said: “Characteristically modest, Craig did not tell us that he was undertaking this feat until the morning of the swim. The Three Amigos took trackers with them so, once we found out about the challenge, we could follow their journey on-line in the office. We were thrilled for them when they made landfall in France. And delighted that the trackers gave away their first port of call as a bar on the pier at Carteret!”